You have 0 products in your cart
Total: 0.00€
MENU
Chronicle of his Illness and Death

Chronicle of his Illness and Death 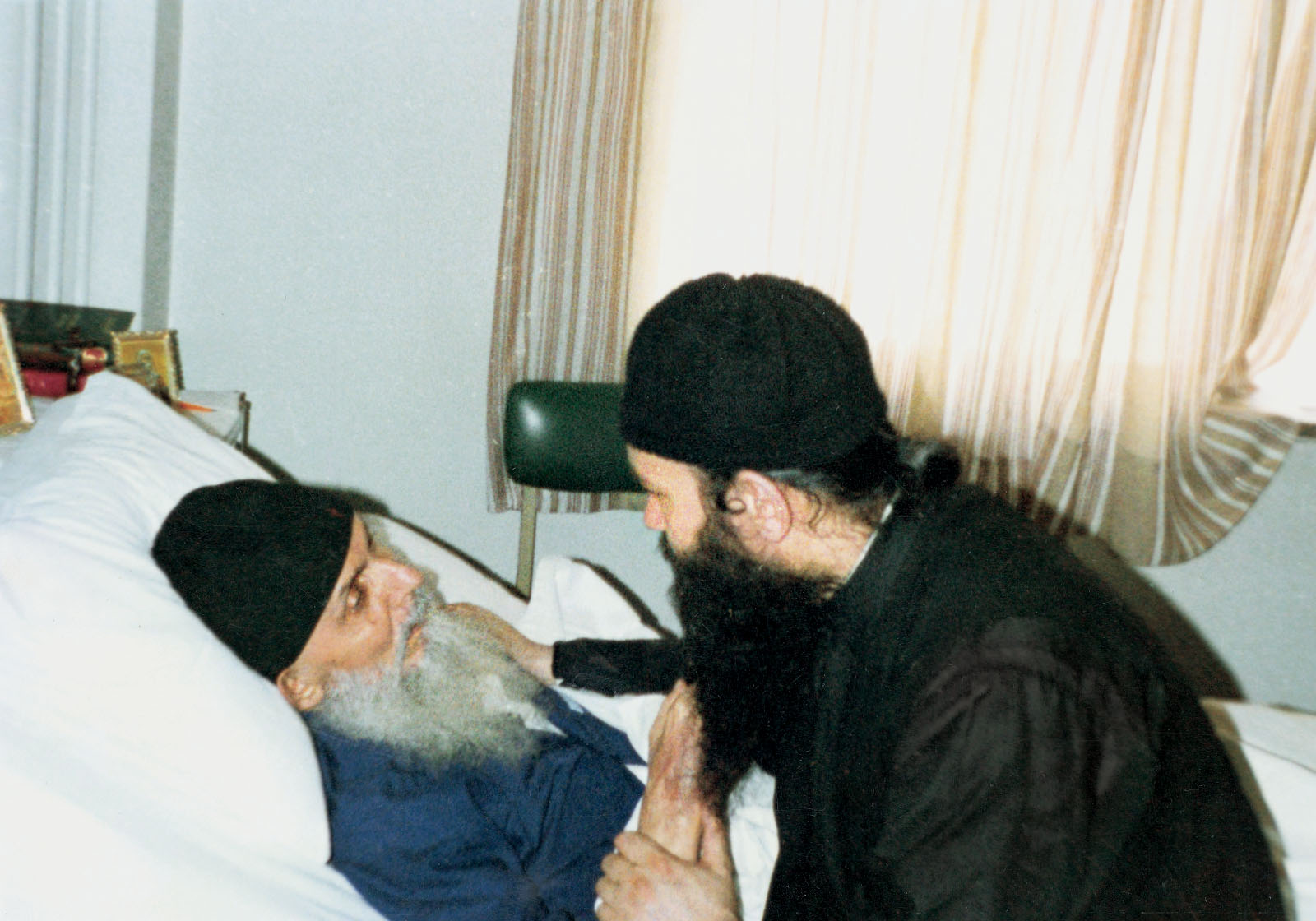 St Kallinikos had a strong physical constitution, although he was of small build. He did not suffer from any particular illness, but all his tiredness from an early age contributed to his premature physical deterioration.

During his illness, his whole inner spiritual world, of which even his close associates were not fully aware, was revealed. I shall therefore be more analytical and go into more detail. The seven months of his illness were a revelation of his sanctity.

A few days before Christmas 1983 the first physical symptoms appeared. His left arm lost its strength. He realised this when he tried to lift something. At first he was not very concerned. As time passed, however, he began to have various suspicions. He went through the Christmas feasts in this state. In fact, during the Divine Liturgy on New Year’s Day he had difficulty holding his staff. There is a photograph of the procession towards the Kioupri bridge on the day of Theophany to throw the Precious Cross into the water, which clearly shows that his arm was hurting. He faced this with inner calm and absolute trust in God’s providence.

After the initial examinations, which did not show anything, it was decided that he should have a CT scan. This revealed a brain tumour. The radiologist told this in confidence to the episcopal deputy, Fr Damianos Mylonakis, and he concealed it from St Kallinikos. The following conversation took place between the two of them:

“Fr Damianos, what have you understood? If you have understood something, tell me, because we clergy should know how things stand, so we can prepare ourselves.”

“Your Eminence,” he replied, “even if anything happens, I believe that you are ready.”

“Ready is one thing; absolutely ready is something else.”

In the evening, without his knowledge, we telephoned his brother, who was a judge in Athens, and Archimandrite Epiphanios Theodoropoulos, his close friend, and discussed with them how we would persuade him to go to Athens, and then we would travel to London for an operation.

On Saturday we bought a ticket for him to Athens, at his brother’s insistence. St Kallinikos himself wanted to delay, because on Monday he had various administrative problems to solve. He thought, of course, that he was going to Athens for general examinations and nothing more. I tried to convince him that we should go to London for better examinations, and that he should give me authorisation to obtain a passport for him. He gave way to my insistence.

On Sunday morning he celebrated the Divine Liturgy in Kerasia, a small village near Edessa, in accordance with his programme. I went with him, and thus I was accounted worthy to celebrate with him for what proved to be the last time. He did not hold his staff, of course, and he had great difficulty in using the double and triple candlesticks. The sermon on that day was prophetic and revelational. He spoke about spiritual blindness. One of the things he said was that it did not matter about having our eyesight, but our soul must have its sight, and that “even if we are physically blind, it is enough that we should have God’s Light within our soul and have spiritual eyes.”

After the Divine Liturgy, we went back to Edessa to prepare the things that he had to take with him. He left me 50,000 drachmas that he had on him, part of his salary for the month of January, which he had received a few days earlier. It was the only money he had. He wrote a note directing that, if he died, this sum should be given to poor people without receipts.

The note reads as follows:

This is my personal money from my salary for the month of January.

I have no other money. If I die It should be given without receipts to poor people, at the discretion of the General Episcopal Deputy and of the Diocesan Preacher, Fr Hierotheos.

At midday on Sunday 22 January we travelled to Thessaloniki so that he could fly to Athens.

On Monday morning he underwent general and specialised tests. They confirmed the findings of the doctors in Thessaloniki. Now, however, he found out himself that he needed to go to London for an operation. I arranged for his passport to be issued and I exchanged 50,000 drachmas, the only money he had. It should be noted that the total cost of converting the currency was 52,000 drachmas. As he had no other money, his brother the judge paid the charges.

From what the doctors in Athens had told him, he understood how critical his condition was. Therefore, on the afternoon of Monday 23 January, he dictated his will, which we shall see in another chapter, to a notary in Athens. The fact is that he always had it in mind to write his will, and he knew exactly what he wanted it to contain.

In the morning of Tuesday 24 January he made his confession to the ever-memorable Archimandrite Agathangelos Michailidis. On the same day I came to Athens to accompany him to England for the operation. When I went up to his sister’s home, where he was staying, he was waiting for me at the front door of the flat, and almost his first words were: “Today I had a bath!” He was referring to the general confession of his life, which he had made that morning. Thus he was ready to go to his martyrdom.

On the morning of Wednesday 25 January, he asked that we should pray together, and we said part of the Matins service. He then asked me to read something from Holy Scripture. I opened the New Testament, and my attention fell on the Epistle of St Paul to the Philippines, verses 21 to 24 of the first chapter. The Apostle said: “For to me, to live is Christ, and to die is gain. But if I live on in the flesh, this will mean fruit from my labour; yet what I shall choose I cannot tell. For I am hard-pressed between the two, having a desire to depart and be with Christ, which is far better. Nevertheless to remain in the flesh is more needful for you.” After the reading, he said, among other things: “That is what the Apostle says. It is not for us. It is beyond us. But may God’s will be done.”

I was with him all day. I telephoned many people to tell them that that he was leaving for London, and to ask for their prayers. Although he had leave from the Synod to go to London for personal reasons, he nevertheless said to me: “It is not right that the Archbishop (Seraphim) does not know the real reason for my journey. I should telephone him to let him know.” He telephoned him at once and asked for his prayers that he might make a good recovery.

This incident shows his ecclesiastical way of thinking and his respect for the canonical order. Also, when we reached London, the first thing he did was to telephone Archbishop Methodios, the then Archbishop of Thyateira and Great Britain, to inform him that he was in London and that he was going to have an operation the next day. He was sensitive in every respect, and he acted as a hierarch of the Orthodox Church.

On Thursday 26 January we flew to England. It was his sixty-fifth birthday.

In the plane we were mostly silent, but he wept three times during the flight.

The first time was when he reflected: “We are going abroad in the best possible circumstances for an operation. But what about the people of God? How much hardship they suffer!” At that difficult time he felt compassion for the people.

The second time he wept was when he told me: “My son, I am a sinful bishop, but I fear God and I love the Church and her glory. Say this when I die.”

The third time was when he remembered that he had written his will. He told me then for the first time: “I wrote my will. I said I wouldn’t tell you, in case you were upset. I made you one of the executors. I could not find the right words to express my gratitude and love for my assistants. God had blessed me greatly. He gave me good relatives and good assistants. You are to take the ever-memorable Hierotheos’s mitre.” He said this to me interrupted by sobs and tears. The blessed man used to say, “I was unworthy to receive so many blessings from God, and that he should send me good and honourable assistants.” All this shows the nobility of his character.