You have 0 products in your cart
Total: 0.00€
MENU
The Therapeutic Character of Orthodoxy

The Therapeutic Character of Orthodoxy 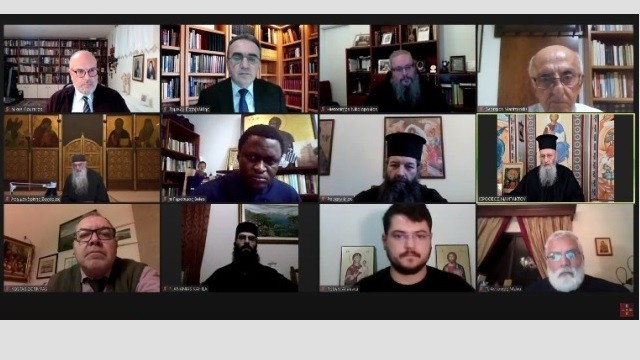 I am delighted with this meeting with His All-Holiness the Ecumenical Patriarch Bartholomew, my dear distinguished fellow-speakers, and our dear viewers today, on the Sunday of Orthodoxy, and I should like to take this opportunity to pray that the God of our Fathers may bless us and keep us within the Orthodox Church.

This is important, because Orthodoxy is not an abstract doctrine, but the life of Christ that is lived within the Church. Orthodoxy is the true glory and belief of the Church, so Orthodoxy is closely connected with the Church and the Divine Eucharist.

It was suggested to me that I should speak on the subject ‘The Therapeutic Character of Orthodoxy’, and I was pleased to accept, because I know that within the Orthodox Church we are healed by the true physician of souls and bodies, who is Christ, and this comes about through the Sacraments and Christian asceticism, through theology and the hesychastic tradition of spiritual vigilance.

In the last analysis, the healing of human beings is not something psychological or religious, but pre-eminently theological. It is the transformation of the powers of the soul, so that they progress from acting contrary to nature to acting according to nature and above nature. This is accomplished through the Sacraments of the Church combined with Christian asceticism. It is the human being’s progress from being in God’s image to being in His likeness, such that self-love is changed into love for God and other people.

I have expounded this in many books and talks, but today I shall do so through the ‘Synodikon of Orthodoxy’, which is read on the Sunday of Orthodoxy in church, in whole or in part, and which makes clear, on the one hand, that Orthodoxy is the living Christ, while showing, on the other hand, that therapy is the human being living in Christ.

1. ‘The Synodikon of Orthodoxy’

The ‘Synodikon of Orthodoxy’ is divided into two large parts. The first consists of the decisions of the Seventh Ecumenical Council (787), which laid down the theology of the holy icons and determined the whole theological context in which they should be honoured by Christians. The second part consists of the decisions of the Ninth Ecumenical Council (1351) in the time of St Gregory Palamas, which determined that the light of God is uncreated and that the precondition for sharing in this light is sacred hesychasm, the life of spiritual vigilance.

These two parts of the ‘Synodikon of Orthodoxy’ set the theological and ecclesiastical bases for therapy from the perspective of the Orthodox Church.

The central focus of the decision of the Seventh Ecumenical Council is the Son and Word of God, Who through His incarnation healed the whole of human nature, for “what is not assumed is not cured,” according to St Gregory the Theologian. The God-man Christ has two natures united in His hypostasis; He joins what is created with what is uncreated, the visible with the visible, the circumscribed with the uncircumscribed. Uncreatedness refers to the divine essence, and createdness refers to the human nature. And this is confessed both “in word and in images.” That is to say, we believe and declare “words by means of writings and deeds by means of forms”, and benefit results from proclaiming God in words and affirming the truth through icons.

The mystery of the incarnation of the Son and Word of God is therefore confirmed both through theological words, which are preached by Fathers who have beheld God, and through the holy icons, which are painted by holy iconographers. Moreover, “as the eyes of those who see them are sanctified by the sacred icons, so the nous is led up by them to the knowledge of God”, just as happens with sacred church buildings, sacred vessels and all holy treasures.

Theological words and the holy images lift the nous to knowledge of God. In other words, they heal the human being, as the centuries-old tradition of the Church confirms. For this reason, the Seventh Ecumenical Council refers to the written and unwritten tradition that originates from the visions of the Prophets and the teaching of the Apostles and Fathers, that is to say, from the identity of experience and theology between the Prophets, Apostles and Fathers.

Next, the central focus of the decision of the Ninth Ecumenical Council is the teaching of St Gregory Palamas, who did away with the mistaken beliefs of Barlaam and Akindynos. According to this decision, the Light that shone at the Divine Transfiguration was not a created apparition, nor was it God’s essence, but it was the uncreated and natural grace and radiance and energy, which proceeds “everlastingly and inseparably…from the very essence of God.” The God-man Christ has two energies, divine and human, but the divine essence is incommunicable, whereas the divine energy is communicable. Christ’s glory is revealed “by God’s love for humankind to those whose nous has been purified.”

It is clear from this that Christ is true God of true God, but also man, and through His incarnation He healed the human nature that He assumed from the Most Holy Theotokos. From then on, those whose nous is pure, by the grace of God, behold God’s glory and are cured in many different ways.

These points, very briefly, are contained in the ‘Synodikon of Orthodoxy’ that we read on the Sunday of Orthodoxy, and these are the foundations of Orthodox therapy, which is different from any other therapy, whether Christian, religious or psychological.

As has already been mentioned, when we speak about therapy in the Orthodox Church, we mean the human being’s progress from being in God’s image to being in His likeness, as God’s likeness is a given fact and His image is its development: it is deification and union with God.

Being in the image and likeness is not interpreted philosophically or sociologically, but theologically, as we see it in human beings before the Fall, who were in God’s Light, and ought to have become established in this state and to have developed even further. However, through sin, they lost the divine likeness, the glory of God, and the image of God was darkened and obscured. According to the words of the Apostle Paul, “all have sinned and fall short of the glory of God” (Rom. 3:23).

I shall now present the progress of human beings from God’s image to His likeness, which constitutes their therapy, according to the teaching of the Church, as expressed in the writings of St Gregory Palamas.

Barlaam spoke about how people progress from being in the image to being in the likeness in accordance with Platonic prototypes. Thus he asserted that the inner principles of natural mysteries are to be found in the divine and primordial creative nous, whereas the images of the principles that are in that nous are placed in our souls. This is why we strive to understand these inner principles and to rid ourselves of every kind of ignorance by the methods of distinction, syllogistic reasoning and analysis, and in this way to be conformed to the likeness of the Creator, both while we are alive and after death. This is what Barlaam upheld.

St Gregory Palamas, however, refuting this philosophical and Platonic therapeutic method, writes that the knowledge that seeks God’s image in worldly wisdom is “false knowledge”, since sin has distorted the soul. To be specific, he writes that the passible part of the soul rose up in wickedness and corrupted the powers of the soul, confused the insight of the soul (the nous), and removed it far from its original beauty.

This means that anyone who wants to receive intact the divine image and knowledge of the truth must attend above all else to the insight of the soul, the nous, and refrain from sin, read the law of the commandments by practising them and acquire every virtue, and return to God through prayer and true theoria. It is only through purity that one will acquire the wisdom of God that overcomes the world, and live joyfully with the only wise God.

Consequently, we have distorted the powers of our soul through sin, and our soul’s insight has suffered confusing. For this reason, through life in Christ in its entirety (keeping the commandments and prayer) one acquires the divine image intact, gains right knowledge and attains to theoria, in other words, to being in God’s likeness.

This therapeutic method, which is purification of the divine image in human beings and of the clearsighted nous, and progress towards being in God’s likeness, is described by St Gregory Palamas in more detail in a divinely inspired text that he wrote ‘To the Most Reverend Nun Xenia’, in which he discusses passions, virtues, and the fruits of stillness (hesychia) of the nous.

He speaks in this text about the life of the soul, which is its union with God; the death of the soul, which is departure from God; the passions; healing the tripartite soul; and poverty of spirit, which gives rise to mourning and consolation from God. This comes about when the nous withdraws from all material things, observes its inner man, and sees the “ugly mask” that results from wandering around outside. Then the human being strives to wash it away through mourning. Once this “ugly mask” has been removed, the soul prays in the inner treasure-house, and then God bestows peace of thoughts and all the gifts of spiritual betrothal and the soul becomes God’s bride, is purified of every idea and fantasy, and stands deaf and speechless before God. The body united with the soul also receives tokens of divine beauty. It acquires a stable state of virtue, and the body has little or no inclination to sin. Then the human being understands realities that transcend nature and receives many gifts of grace from God, such as miracle-working, visionary insight and foresight.

Christ’s first Beatitudes are therefore of great significance: “Blessed are the poor in spirit, for theirs is the kingdom of heaven,” and “Blessed are those who mourn, for they shall be comforted” (Matt. 5:3-4).

Bringing this short address to a close, I should like to stress in conclusion that the Sunday of Orthodoxy, as expressed in the ‘Synodikon of Orthodoxy’, shows that the Son and Word of God is the image of the invisible Father (Col. 1:15). He became man and showed us God’s glory and our own ingloriousness on account of sin. And through our life in the Church, which is His glorious Body, we are healed: from being in God’s image we come to be in His likeness.

This is the content of ecclesiastical and theological therapy: that the divine image in us be purified and be led towards the divine likeness. And this distinguishes Orthodox therapy from any other kind of psychological and religious therapy.

Online Theological Meeting: The Message of Orthodoxy to Modern People